Moving To Far Away Places

December 27, 2012
In our local magazine called 'The Parishes Paper', which goes to residents of the five parishes I serve, I decided that simply publishing the official notice of my departure was probably not helpful, and that people would wonder why on earth I wanted to move from this beautiful place, with good people, an ancient history and usually temperate weather (this last year notwithstanding).  So I prepared a short article which described the process.  It's not really a 'why' but more of a 'how' this happened.  The why's will come out more as I continue to write, I hope.... 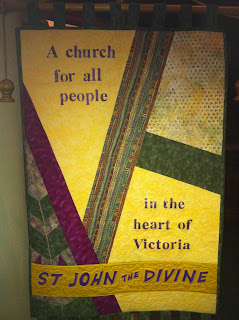 God’s Call…. And the Bishop’s

At the beginning of November I received a phone call from James Cowan,  the Bishop of British Columbia inviting me to become Rector of St John The Divine Church, Victoria, Vancouver Island, British Columbia.  This was the end of a process begun in June when I took a funeral in Kilmington for a man who I hadn't met, but whose son – a Bristolian, now a Lay Canon in the Cathedral in Victoria – had been visiting for the past few years and got to know me.

After the visits which are usual for a funeral, a number of conversations and finally the service itself I received an email headed ‘an impertinent suggestion’ – which recommended I consider a particular position in British Columbia, in a large, broad and inclusive Anglican Church based in downtown Victoria on Vancouver Island.

This was a bit of a surprise.  We hadn't been looking to move, nor had we any desire to consider anywhere else.  Yet because it had been suggested ‘out of the blue’ – and after consultation with some wise Clergy friends and colleagues – I looked at this job in a city and a country I had never visited and wondered whether it might actually be a prompt from God to consider this.

The initial interviews were by phone with a committee of eight people from the parish of St John’s.  Jo and I met one of the wardens for lunch in London whilst he was on holiday, I spoke to our Bishops and Archdeacon and to the Bishop of British Columbia and Jo, Katherine, Jack and I were invited to see the city over the half term and for me to be interviewed face to face and meet these people I had been interviewed by over the phone.

The upshot is that the offer was made, and after nearly a month of deliberation I have accepted Bishop James’ invitation and he has appointed me as Rector, with my duties beginning in August 2013.  It was not an easy decision to make, but as a family we feel this is a good move to make, and we believe that God has had a hand in all of this over these past weeks and months.  We expect our final Sunday to be in June and to move sometime in late June or early July.

This is very much unexpected, it wasn't part of our plan and it certainly isn't due to any desire to move away from here –yet this large Church in a very different context seems to be an appropriate place for us to go to next.  There is still much more we hope to do here, and with the excellent Ministry Team and Mission Community Council we have for Five Alive Mission Community there is plenty for us to be getting on with.  God is faithful and continues to call us all in his service and it is still my privilege and pleasure, for the coming months, to continue to serve this Mission Community.