Showing posts from February, 2009
Show All

All Human Life Is Here

February 16, 2009
One of the reasons that I've not had much time to stop and think lately is because I have had, in the past three days, a wedding, a baptism and a funeral. Unusual to have all three so close together, but with all the preparation and visiting that goes with such events alongside the usual commitments of Church and village life it has been something of a whirl over this past week or so. Things are going well despite all this busy-ness. I have moments where I think I would quite like to just stop, or get away, but that's more to do with fatigue than any great issues over the job or the direction things are going. We are just, as a 'Mission Community' seeking to figure out a bit more of where we are going, what official setup we need to impose on our group of parishes, what the pattern of Sunday services should be etc. In some ways, as I may have said before (brain is a bit fuzzy at the moment) this is where the 'rubber hits the road' as far as my role as Vicar
2 comments
Read more 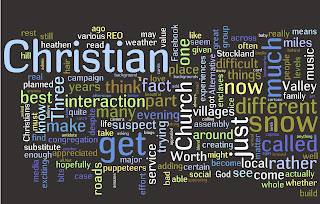 In the absence of time to get my thoughts together, I thought I would publish my wordle cloud - a graphic representation of the most common words on my blog, at least recently! Thanks to Steve Lawson for the tip!
3 comments
Read more

No accounting for taste

February 09, 2009
It constantly amazes me how tasteless I can be! Worth explaining that opening statement, I think. No matter how much I have learnt, no matter how many different music tastes or styles or genres I have been exposed to, or how much theatre I have experienced, or books I have read, or art i have appreciated, some things never change. I still love REO Speedwagon's 'Roll With the Changes'. I finally got around to adding it to my iTunes library this evening, and my iPod will see it appearing with some frequency. But despite the flippancy, it does cause some reflection on those things which we cannot leave behind, or those experiences that make us what we are. In lots of ways I like to think that i have gained a certain measure of sophistication, that my life experience has left me wiser as well as older. That I have matured and grown - just this evening (in the pub, because the best conversations take place either there or in Church) we have talked on the theme of 'if
6 comments
Read more

On Sunday....and mixing with Christians and not!

February 09, 2009
Well, as Quilly said in comments, the service that I thought might just have a few folk at had over a hundred people along and was joyful and filled with praise. Sadly, the loss of puppeteers was a disappointment to a few, but on the whole those who made the effort really appreciated and enjoyed it. The worship was uplifting, the fellowship was heartwarming and the feeling of being together as the people of God was quite overwhelming. It was encouraging to see how many had braved quite difficult conditions (much of the snow, and snow melt lying on the roads had re-frozen overnight making some bits very exciting indeed) to come to Church. I was moved to see the cross section of those who came, from different villages, different ages (we had four generations of one family at the service), different backgrounds - with various levels of commitment to Church! So a tiring, but worthwhile experience. This morning, in between bits of admin and tidying, preparing assembly for this aftern
5 comments
Read more 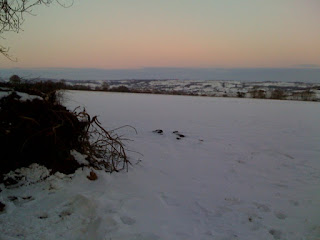 For those who have been following my twitters (tweets!) and facebook updates you will know that I have been grumbling about the lack of snow here - when all around the villages and towns seem to have been inundated - that means it is very difficult to get about, but we haven't even had the chance to build a snowman in the Vicarage garden! Three miles West of us, as you crest the hill into the Otter Valley, there was some wonderful snow covering the fields, just north on what is called 'the Seven Mile Straight' there was some impressive drifting by the road, and some very exciting driving trying to get into a village called Stockland, about three miles East - on the other side of our valley - there was enough snow to close the road. But here its just been slush, freezing, ikky gloop. No fun at all. Not that any of this is without its problems, whether snow or sleet or ice it is impossibly difficult to get around these parishes. If you do it is often worth the effort!
4 comments
Read more

February 06, 2009
As promised, the catch up continues Epiphany (2008) Come to the king, whoever you are… I don’t know if you remember the Christmas publicity campaign from a few years ago, one which caused some controversy at the time, but being broad minded myself I rather liked it. It had a cartoon picture of three outrageous faces with a caption which went something like this: You’re in a stable, you’ve just given birth and now three kings have turned up with presents for the baby – talk about a bad hair day.... Of course, it’s trying to get us to think about the familiar story of the arrival of the wise men in a different way, which most of us who are responsible for preaching and teaching during our major Christian festivals are always trying to do! I think that, and the fact that ‘bad hair day’ is one of my favourite modern phrases, means that this ad really appealed to me, despite the fact that various green ink users in Tonbridge Wells got very excited about the whole campaign. [more]
Post a Comment
Read more

It really is catch up time!

February 05, 2009
In an effort to operate a policy of full disclosure, or at least to get up to date, here's the latest sermon I have posted at New Kid Deep Stuff . In case you were wondering the [more] at the bottom of the post doesn't open up the post itself, it takes you off to the exciting realm of my other blog site. Just so those who don't want to read a whole sermon can look at the other things here, really - thanks to Standing Under the Sky for the tip! Unfortunately a quick look around my bookmarks reveals that Standing Under the Sky no longer exists so hopefully the thanks vibes will end up with whoever.... The Sermons begin (more posts over the next few days, hopefully) Christmas 1 2008 Incarnation I enjoyed my Christmas this year, actually I enjoy my Christmas celebrations every year, and the many and varied services I took part in were quite moving and very enjoyable. But now the big day has come and gone, the present wrappings have all been cleared up, the afterma
Post a Comment
Read more

Have been meaning to blog

February 05, 2009
Like so many things, blogging seems to have fallen by the wayside in the past few days, not that I can pinpoint any particular reason, just lots of distractions. It certainly isn't because of the snow! Despite most of the UK being covered in snow, and (according to the media) most of the world grinding to a halt, we have had hardly any here in the mild South west. Actually, looking at the weather map it looks almost as if the snow has been avoiding us, and only us - further west has had some heavy snow, and further east, and further north, the south is coast, so there's not been a great impact there - until you get to France where they too have been snowy. So, much to the chagrin of my wife and offspring, the snow has pretty much bypassed us so far (apparently this might not be the case next week!). I couldn't do much travelling yesterday morning, but by the afternoon it was fine to be out on the roads and I scooted off to do Wedding Preparation afternoon with a coupl
3 comments
Read more

there probably is no bus

Just a quick link, which seems to be getting a lot of coverage The bus slogan generator After the Atheist Bus Campaign printed 'There probably is no God. So stop worrying and get on with your life.' on the sides of buses, claiming that they were fed up of 'religious advertising' (actually, many of us with any kind of faith aren't so keen on most 'religious advertising') someone had to come up with a way of being able to make our own bus posters on line, and here it is ! Enjoy! Oh, and the campaign did a great job of getting people to actually talk about faith, which is a good thing - maybe I should contribute to the campaign to keep these posters going :-) My favourite response was from the Church Times cartoonist Noel Ford. ..not sure if this is copyright, if so then i will take it down if requested... Go see the Church Times site anyway, its worth a bit of a look around....
4 comments
Read more
More posts