Showing posts from September, 2010
Show All

Another sermon, as it's been quite a busy week...

September 30, 2010
I've prepared quite a few sermons this week, and because of the unique nature of all the events I haven't even been able to reuse bits of older sermons, or the framework of older talks - so I thought I might as well get some use out of them and pass them on! St Michael & All Angels (2010) RCL Principal Genesis 28.10-17 Revelation 12.7-12 John 1.47-51 Problems with Angels Let me start with a confession. I have a problem with Angels… Not that I mean I have Angels under the bed or falling out of cupboards or anything like that, but I struggle with the whole culture of Angelic beings that has sprung up both within and beyond the Christian Church. Guardian Angels, Healing Angels, Warning Angels. New Age Spiritual Beings. All the Angelology (if that is a word) that I’ve heard about since I was a child. And this obsession with Angels isn’t a new thing – the Church wasted far too much time in the medieval era talking about how many Angels could dance on the he
Post a Comment
Read more

A picture from the Ordination 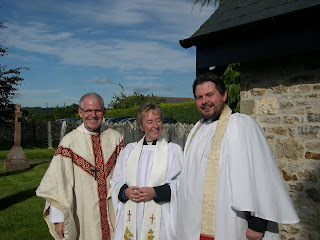 Thought I should let you see a bit of what happened and what the last posting referred to - here's a picture of the Bishop of Crediton, Kate (our new priest) and myself after the service on Saturday last. With a bit of lovely Devon blue sky in the background...and the roof of my Vicarage in the background too!
3 comments
Read more

September 30, 2010
It is very unlikely that I will ever get to preach at an ordination again - but last week I had the immense privilege of speaking at the ordination to the Priesthood of our Curate, the Revd Kate Woolven. It is worth following the link to the lessons for the day before reading the sermon here.... Isaiah 61.1-3 Ephesians 4.7-16 John 20:19-23 Ordination Sermon – Kate Woolven What a privilege it is to be here. Celebrating the ordination of Kate as priest within the Church of God as part of the people of God! Today is a good day, and a wonderful occasion. Already in the weeks Kate has been with us she has proved herself to be a competent, compassionate, warm, funny, thoughtful, faithful, spiritually mature and committed minister – and I still keep being told how good her sermon was at the last Mission Community service we held! Now we share in the next stage of Kate’s journey of being and becoming who she is called to be under God. We are here to support her as Bis
Post a Comment
Read more

And now a sermon for this Evening!

September 05, 2010
Philippians 3.7-14 Song of Songs Chapter 8.6,7 St Giles Patronal 2010 Saintly Calling It’s a pleasure to be gathered here with the people of God to celebrate our patronal festival at this evensong this evening. A pleasure because our remembrance of Saints, and today we remember particularly St Giles of Provence, is an uplifting way of reminding ourselves our our heritage of faith, and because a patronal festival reminds us of our heritage and history in this place, and calls us to faithfulness as God’s saints here and now in our parish and as part of our Mission Community. As I said this time last year (though I would be interested as to who could remember that, I had to look it up). We have a good example for us in St Giles of Provence whose feast day was actually on Wednesday of this week just gone... [more]
Post a Comment
Read more

A sermon from this Morning

September 05, 2010
It's about time I posted a sermon up here, so here's this morning's offering... or at least a taster, click [more] for the lot! Proper 18 (2010) Year C RCL Principal Jeremiah 18.1-11 Psalm 139.1-5 & 12-18 Philemon verses 1-21 Luke 14.25-33 Grow Up! One of the subjects that comes up again and again in our household, as is probably the case in any household with small children, is ‘growing up’. What do you want to be when you grow up? Is one of those questions that Katherine and Jack seem very happy to keep replying to, despite giving different answers most times its asked. Or there are comments about ‘how grown up they look’ or ‘aren’t they growing up fast’. Most of us have probably heard all this before and if we don’t remember people saying it to us, then we probably remember it being said to our children, or grandchildren, or other family members or friends... [more]
Post a Comment
Read more

A Slight correction, addition, amendment, or something....

September 03, 2010
I am grateful for the feedback I've received on my post yesterday about ministry, and on reading it back (as you do after a bit of a rant) there was one statement I particularly wanted to say something about. Actually there are lots of parts I could expand on, but one thing I think bears a bit of scrutiny. I said that Clergy are 'defined by their education and the way they dress'. What I meant by this is that people often defer to me in 'matters spiritual' because they know that I have some kind of training for this ministry business. I also have a fair amount of experience, and have made my share of mistakes and hopefully learned from them. I think that trained and resourced members of the Church are crucial, though it isn't just Clergy that fulfil those criteria - we have gifted and dedicated Readers, and various members of our communities with oodles of training and experience under their belt. My experience of Readers in the three Dioceses I have worke
1 comment
Read more

The Vicar is dead.....Long live the Vicar! 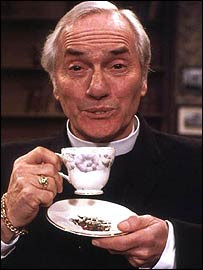 On return from holiday I had lots to deal with, a pile of mail that was nearly as tall as me, various calls to respond to, and an update on all that had been going on in my absence. All good, or rather everything went well, though it had been extremely busy and very well covered by my colleagues. In the week since I've got back though I have had a number of conversations where people have expressed disappointment that 'The Vicar' didn't do X or Y, or that Clergy haven't visited certain folk - despite the fact that I know I have extremely competent colleagues and very good lay pastoral visitors from all of the Churches who have handled things as well, if not better, than I ever could. It boils down to the erroneous belief that things are somehow more 'kosher' if a man (preferably a man in many cases, but that's another issue which I am not going to rant about today) with a 'dog collar' does it, be it opening fetes, visiting people or services i
6 comments
Read more
More posts