September 24, 2013
There are some days I really wish I had all the answers.

Or just a few more.

There have been a number of people who have responded to my blog post last week on Sin, and to my sermon on lost and found on Sunday a week back, and just in general discussions, and a few conversations people have requested.  Most get stuck at the question - how does God allow suffering?  If God is as gracious as I would (boldly and wholeheartedly) proclaim then how can God allow people to suffer? 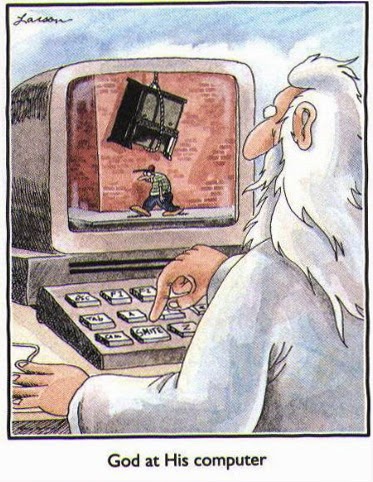 It's not a new question. It's something Theologians and Philosophers have been struggling with for centuries.  Our Hebrew/Christian Scriptures also wrestle with it - as is entirely appropriate for books which contain God's revelation of Godself to humanity.  But there are no easy answers, no pat response.  At least not from where I am sitting.

Some traditions will say 'It's all God's will, so it's a mystery'.  I get the second part of that, but I (like so many) don't get the bit that somehow God wills people to suffer.  The idea that God puts people through tests, which can involve such pain as losing a loved one, suffering through illness, desolation and agony is, frankly, abhorrent.  And though some say "it's just an unpalatable truth that we have to be subject to God's sovereignty in these things" I would respond "baloney".  This of course is a deeply worked out theological response. Almost as profound as the idea of God's 'smite' button on the Divine PC!

I've mentioned before on this blog, probably a few years back, that I fear sometimes we imagine God to be like Gods of Olympus in the 1970s movies where Jason and his Argonauts were moved around like so many pieces on a chess board. Do we really have a view of God that just makes us pawns in some gigantic game? Those of us who wrestle with  discerning God's activity and who try to find meaning in good and bad, in the world around, in reading and learning from scripture find such a picture of what is manipulative and ultimately cruel divinity offensive. 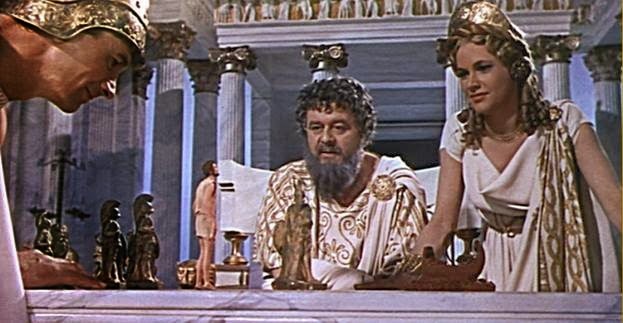 The idea that God would actively harm people, even if to create 'strength of character' or to test them, or to teach them something suggests a fair amount of sadism on God's part.  On a purely human level, I might want to teach my kids a lesson, and sometimes that might mean stopping them doing something they enjoy - but punishing them by denying them hope, or love, or by physical violence is not 'teaching' it's abuse.  I know there are times when we feel a profound absence of God, and when we feel distant, or despair overwhelms us but I am skeptical of the idea of a God who withdraws from us, or distances him/herself from us.  On the other hand I don't believe God scoops in as rescuer either, but is alongside us in our suffering rather than giving us an escape route.

It's the presence of God, even when unfelt, that is for me the Christian response to suffering.  In a short blog post like this I don't even pretend to be able to work out an answer at length, or even of depth, but I profoundly believe that God is present and alongside us in our suffering.

There was a quote from Father Nathan on Twitter this morning which grabbed my attention: 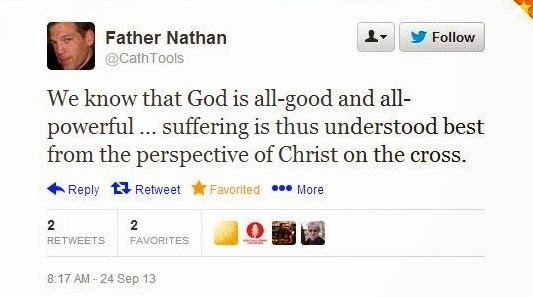 This reminds me that suffering is not just an 'in theory' for God,  but that God knows what it is to suffer, and empathises and suffers with us.

The struggle I think many of us is to find meaning in suffering.  We as human beings look for meaning and pattern, for what is behind what is happening. We search for meaning.

We ask why, it's the way we seem to be built.

I wonder if sometimes, though, there is no 'meaning' behind suffering.  Is that harder to deal with?  That there is no purpose to suffering, but that suffering just 'happens'.  As a Theologian I can link suffering to sin - not to one person's sin, but to the brokenness of a world where sin prevents wholeness.  This is a creation 'groaning in travail' because of the darkness of the world that comes from the brokenness that sin brings to our world. 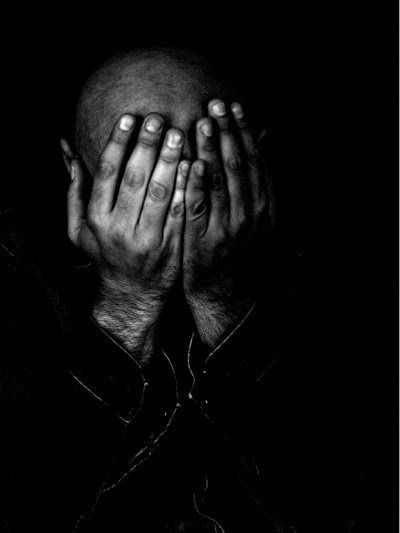 We can't draw a straight line between a person getting sick, or being in an accident, or losing something, or suffering and their own sinfulness - that only reflects a view of a God who is capricious and vindictive. But we can gain some meaning from saying that God has given us complete freedom, and so the world is as it is. What I mean by that is the gift of free will we have to take into account God not just 'allowing' us to make choices, but making a world in which absolutely genuine choice is possible. Now I'm not arguing for creationism in the narrow 'it took SIX days' form, but I do believe in God as a creator who had and has a hand in this universe.  My favourite description of this was my undergraduate lecturer who said his understanding of creation was God looking at nothing and saying 'know me' and everything going from there.  That allows me to understand a God who creates by God's word, and yet the infinite possibilities of a "big bang", a dynamic universe and the processes of evolution.

So we live in a world where earthquakes and volcanoes erupting happens, and people are hurt by that.  But without a dynamic, molten core the earth would be a dead planet.  We have weather which causes flooding, freezing, or cancers through sunshine - but without the dynamic meteorological system we wouldn't have the seasons that make growing, sowing and reaping, possible.  Though there is an ongoing discussion as to how much we are adding to extreme weather events by our care, or lack, of the environment.... 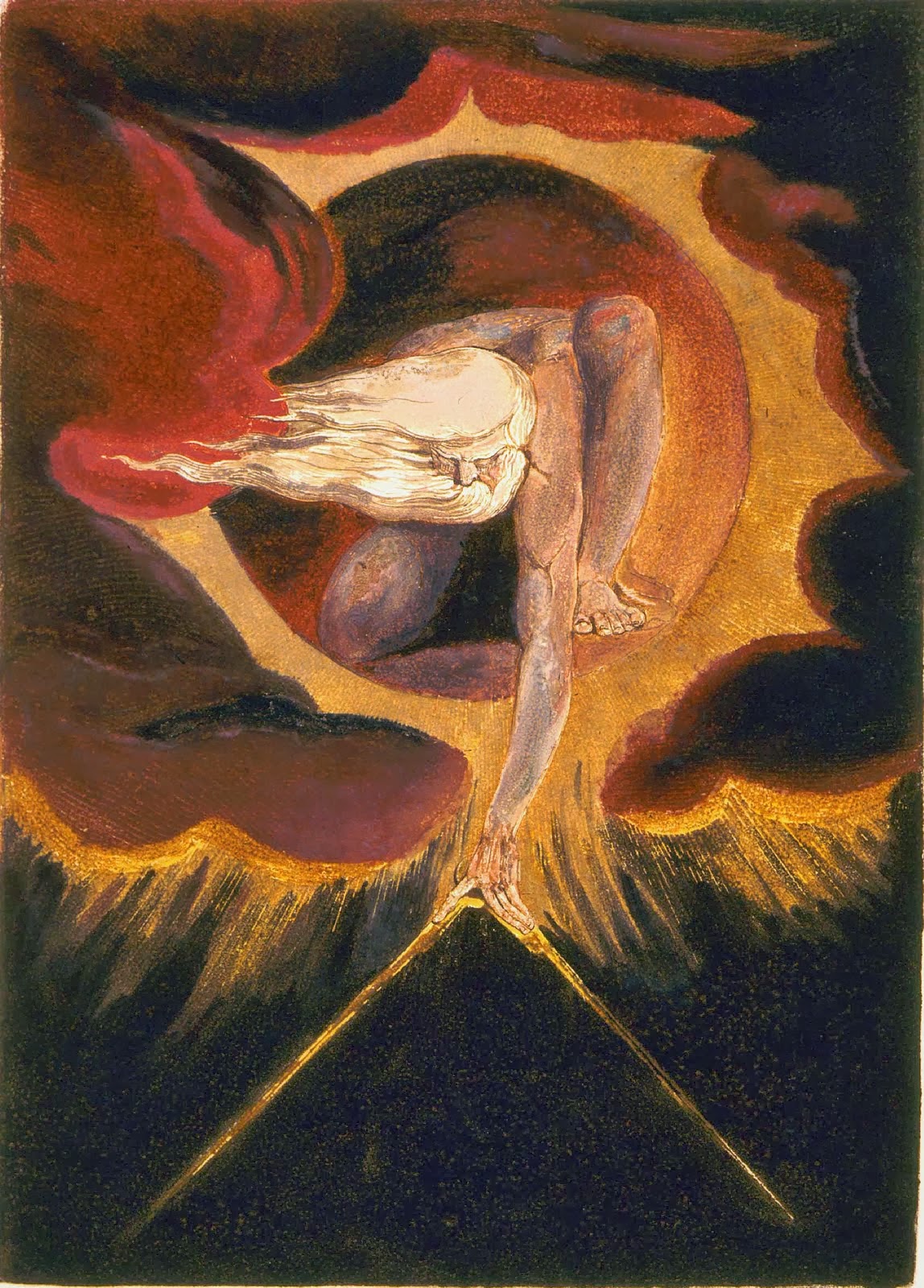 We have a world which is alive with the possibility of absolute freedom.  This means that it is not a safe, easy, trouble free world.  We have a world which is dynamic, and wild, and dangerous.  We also have a human race which is prone to sin, that we mistreat each other, and ourselves and that can bring about consequences which harm us and one another.  Along with this I believe we have a God who is absolutely with or for us, but who rather than intervene in the world which s/he has made absolutely free, works in and through us, frail, fragile, fallible human beings in order to offer hope, life and healing to this world.

So what is our picture of God?  Is it of an interventionist God who causes one person to be ill, another to be well with apparently no justification one way or another - or even worse, to try and prove a point or test someone?  Is it of a God who has no concern for human life or suffering? Is it of a God who has chosen to allow humanity such freedom that we do get sick and die and we do live in a world that is dangerous and dynamic?

These are only my thoughts. I make no claim to having all of the answers.  I wonder if we are so keen on finding 'meaning' and clarity that we do find it hard to cope with mystery, or open ended questions?  I certainly think that church communities should be places we can wrestle with such things - and these thoughts, along with a challenging bit of Luke's Gospel and some deep conversations I have had recently had a profound effect upon my sermon for this week, which I will post in audio format very soon....

Anonymous said…
So much to consider and upon which to reflect. Again, thank you so much Alastair. -Paul
5:41 am

Bob MacDonald said…
There is lots written on this. Would one word do? 'presence'. Or in the language of Isaiah - God with us, Emanuel. God in the whole mix of good and evil. The Psalmist (39, 144) and Qoheleth can say 'futility' - but 'God with us' says otherwise - in tension. If this is looked at in terms of possibilities - then prayer opens up new ones even if the cup has been drunk to the dregs (Psalm 75). This 'explanation' must remain inadequate. Sense-making is incarnational not cerebral, concrete not abstract.
6:46 am

Physical suffering...I have no real answer for why a supposedly loving God thinks cancer is a good way to bring a kid to heaven, however, I find that my cancer pain can go away when I pray myself into a trance. And stays away a long time afterwards. Can't pray yourself into a trance...try harder. Anybody can do it. Otherwise, remember, a truly loving God will allow people to become smart enough to do medical research. Oh look...it happened! Well, that answers that.


Psychological suffering... Lots of that is high school drama, get over it. She is in a better place, he really didn't love you after all, you can't have a baby...you are ugly on the surface but beautiful inside... the usual suspects. All psych suffering is easily handled by prayer and hanging out with winners.

So what is this suffering stuff? Do something about it.
9:47 pm

Inspector Clouseau said…
Nice blog work. I particularly like the manner in which you interweave pictures and illustrations into your posts.

I came across your blog while “blog surfing” using the Next Blog button on the Nav Bar located at the top of my blogger.com site. I frequently just travel around looking for other blogs which exist on the Internet, and the various, creative ways in which people express themselves. Thanks for sharing.

Philip G said…
Take God out of the equation. Nothing changes.
1:22 pm