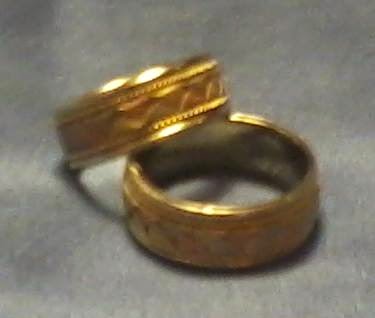 It's incomplete, and I made the deliberate choice not to stuff it with references and quotes. This one comes from the heart:


To Marriage Commission of the General Synod
Anglican Church of Canada

My response to the questions posited by the Marriage Commission are below.

What Scripture says about marriage is much more fluid and less easily pinned down than those who advocate for ‘Biblical Marriage’ often proclaim.  We see throughout the Biblical texts multiple models for relationships: monogamous and multiple partner marriage, concubinage, co-habitation, and much more are all endorsed, or simply understood as present as the scriptural texts reflect the cultural norms from which they arise.

What I understand from Scripture is that there is a significantly nuanced understanding of human relationships and that sexual and social relationships are to be based not upon gender, but upon faithfulness. As a reflection of Christ’s faithfulness and dedicated relationship to the Church marriage offers a parable of sacramentality.

I do believe that faithfulness in a loving relationship is held up as an exclusive relationship.  Marriage is the commitment of two people to one another, in the same way that we see modeled both within and around sexual and non-sexual relationships in the Bible, for instance David and Jonathan, Jesus and Mary of Magdala, Abraham and Sarah, Joseph and Mary the mother of Jesus. These are often flawed, sometimes strained relationships that offer us pictures of commitment and faithfulness, tenderness and dedication.  Marriage is one aspect of human loving, and scripture gives us many pictures of how that might be lived out
.
Theologically, minimal.  The need of a tribal culture to reproduce in order to survive is the foundation of relationships in scripture and becomes ritualised and normative as the culture develops– in the same way that not eating shellfish in the desert is sensible, life-saving advice that becomes ritualised into food laws that are concerned with obeying God.
Only in the sense of the legal contract.  With regards to what is happening in marriage the commitment of two people remains the same whatever way it is marked.

Yet within our Christian culture the making public proclamation of faithfulness to the ekklesia, and the offering of the Church’s “yes” to a couple embarking on this stage of their journey together is a significant statement.  Though marriage in or outside of a church can be understood to be sacramental, the offering of the Church’s imprimatur is a powerful symbolic and affirming act.

In Canada, the Anglican Church has created an artificial distinction between civil and church marriage by refusing to offer marriage to same gender couples. Yet we recognise the loving commitment of such unions by offering blessings to them – it is theologically and socially inconsistent to do so, and such mixed messages should be stopped.

What is the theological significance of:


It is not good for the man to be alone.  From the beginning of our Hebrew mythology we see how humanity is called to, finds fulfilment in and is drawn to society.  We are made for one another.  Though some are called to celibacy or to the life of a hermit or a contemplative, we are as human beings made fully alive in our relationships with one another.  This images the Triune God who in Godsself is in constant relationship energised by infinite and eternal love.

The bearing of children as biological function can, obviously, only be a female endeavour.  Yet if procreation were the end of any Marriage then the Church would not be able to endorse any relationship where one or other partner were infertile, or unable to bear children, or suffering from any disability which prevented childbirth.  More important is the care and nurture of children, however conceived and borne, this is perfectly possible by those in same gender relationships.

Sexuality is a part of who we are and unless one has a vocation to celibacy our sexuality is a part of loving, committed relationships, and best expressed within a marriage partnership. At present we are denying many faithful, loving couples this appropriate expression of who they are.  Sex brings depth and meaning to relationships, it can bind people to one another, heal and create intimacy, it is a gift from God – and for those who wish to live in loving, committed, faithful, sexual relationships I believe the Church has a duty to affirm, support and bless this. Whatever their gender or sexual orientation.
Marriage is the recognition of a committed relationship, a marriage is blessed either as a separate event or within a marriage ceremony.  Strictly speaking they are the same thing – though being able to offer a full marriage ceremony to same gender couples would mean that we no longer offer a two-tier approach to affirming and celebrating the love of two people.  If we are to be a church that models the kingdom values of inclusion, love and grace then having anything that says ‘we love you, but you are different’ is to exclude and marginalise.  This is a matter of justice, acceptance, grace and inclusion – not just a case of ‘keeping up with society’ but making a statement that we are a radically loving group who affirm the commitment of any two people in love.

The efficacy of any sacrament is predicated upon the intention of those involved.  We refer to a sacrament, using the language of the prayer book, as “an outward and visible sign of an inward invisible grace’ but that is an oversimplification of what is a place where the grace of God is made explicit.  Though we believe God to be present in all things and at all times, we mark certain moments of our lives together with a celebration of God’s grace and see sacraments – Baptism and Eucharist being the primary of these – as places in which the presence of God is made manifest through God’s Holy Spirit.
To describe marriage as a sacramental act is to describe the visible love between two people as a reflection of the love of God, where this love is made visible and manifest.  In the teaching of the Church the efficacy of marriage as a sacrament is based upon the intention of the two people entering into the marriage covenant, this (due to prevailing cultural and social mores) has been described as ‘between one man and one woman’ – but this is a definition provided by the Church, and need not be so.  It is faithful, loving commitment that makes this sacrament efficacious, not gender.  It is about time the Church recognised that.

Closing comments:
I believe the offering of marriage, or strictly speaking ‘a Christian Wedding’, to same gender couples is a gospel imperative of inclusion and grace.  Though same gender couples who are married in civil ceremonies are still enacting the sacrament of marriage in their dedication to one another, the Anglican church is at this time called to affirm and support them in their relationships.

I recognise that our church still has a long way to go in drawing all people to this interpretation of marriage and there are some who deeply hold to a view opposed to this, as such we will struggle if we impose this as a requirement.  Though my conviction says that – as with the ordination of women – we should as a Church decide if this is the will of the Synod and the work of the Holy Spirit and stick with that decision – my pragmatism says that in order to preserve the hope of unity and remain in dialogue we should offer some form of conscience clause.  I would honestly prefer that we didn’t have to, the effort to keep opponents to women’s ordination ‘on board’ in the Church of England (the Church from which I came) has prolonged painful and destructive patterns for twenty years and it would be sad to see this repeated in the Anglican Church of Canada.

I hope that this adds to the dialogue taking place at Synod in the near future. I pray that we will move forward together in working for a radically inclusive church which is open to love in many forms, and that the Church at large will soon move beyond its preoccupation with sex and gender.